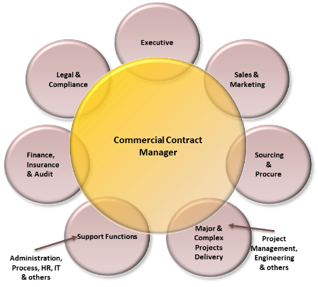 With the fall in the cost of telecommunication services we are seeing the increased digitalization of companies, presenting opportunities to small-to-medium sized enterprises (SME) to trade outside of their home geographies. Whereas this has opened markets to SMEs, it has also increased their commercial complexity. In this article I argue that professional commercial contract management (CCM) services, well-established in large companies, are needed to help the SME navigate through the newly complex world of digitalized business processes.

The International Association for Contract & Commercial Management (IACCM) defines contract management as “a discipline that supports commercial management through the preparation, negotiation, implementation and oversight of legally enforceable performance commitments and risk positions, both outbound (to the market) and inbound (from the market).”1

The CCM role is one of the most cross-functional in a company. The commercial contract manager liaises with most areas of the organisation (see Figure 1) at one time or another in carrying out their role. During an activity such as a bid response, this can mean managing several relationships simultaneously to solicit bid input within a short period of time.

The role is well-established in large corporations, but still seldomly found in an SME where it is often performed by one or more people from the finance, legal or executive functions using well-established processes and commercial terms.

Both the Swiss State Secretariat for Economic Affairs and the European Commission (EC) define an SME as a company employing less than 250 people, and with the EC further defining its turnover to up to 50M Euro2. Compared with a large company, an SME is seen as less bureaucratic, making identification of influencers and decision-makers simpler. Everyone tends to know everyone. The organisation is less complex and smaller, and staff tend to wear more than one hat and have broader responsibilities than at a large company. The business owner or C-level management is much closer to the contract and commercial management than in a large company and often perform CCM in addition to their core roles. Owners holding large blocks of an SME’s shares can have significant influence on the mission of the company, whereas in a large company the shareholders are more distant from its operations.3

There are various definitions available for digitalization, some equating it to digital transformation. Pettersson and Hylving define digitalization as “the organizational aspects of the increasing inclusion of digital technology in physical products and processes.”4 The Swiss government define it as “adapting a business model to information communication technology advances” with the result of optimising “the efficiency of the company in terms of its strategy, production and its customers [sic] relations.”5

In Switzerland SMEs represent 95 per cent of the economy making the digitisation of these enterprises important to the country’s international competitiveness.6 While digitalization has opened new markets to innovative SMEs, it requires the SME to manage the complexity introduced by digitalization7. As a result of digitization of its customer support process, an SME may enter several new commercial relationships with suppliers for software, telecommunication services and support. It may become newly subject to regulations, e.g. through its collection and processing of personal data.

The SME and the Commercial Contract Manager

While many SMEs have been managing well by allocating CCM tasks across the organisation, the increase in commercial complexity introduced by digitalization highlights the need for a professional approach to CCM. Enter the commercial contract manager, the expert in dealing with complexity. The successful candidate needs to fit into the SME environment, and this requires technical and soft skills that are not required within a large corporation. I will discuss these success factors the next article in this series.

Digitalization of business processes provides a competitive advantage for SMEs in Switzerland; however, it brings complexity that many SMEs may not currently be equipped to handle. Commercial contract management services support the SME in this new commercial landscape, enabling it to focus on innovation and value creation.

Acknowledgements: This article is based on material prepared by Albert Schot (schot.ch) and Dr. Ingrid Slembek (inaccord.ch) for presentation at a local member meeting of the IACCM in Switzerland.